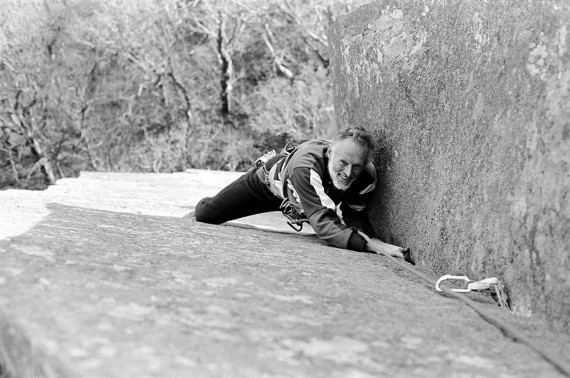 In 1982 Chris Baxter and I had been guests of the BMC (British Mountaineering Council) at the Buxton Conference. After all the excitement of the conference and long hours (spent mainly in the pub) it was something of a relief to load up our hire car and head off for a couple of weeks climbing in North Wales and the Lake District. Joining us was local resident Dennis Kemp and one of Chris’s old Plas y Brenin instructing buddies, Miles Martin. We arrived at the Tremadog carpark on a rare perfect Welsh summers day and we were pleased that Eric Jones (owner of the famous Eric’s Cafe) came out to meet us and point us towards a few of the crags great climbs. We climbed a bunch of classics that day that included Vector E2 5c (21), Falcon E2 5b (20), Silly Arete E3 5c (21) and Vulcan E4 6a (23). However, it was the first route we did that I remember most vividly, possibly because it was the only climb on which I took any photographs. PincushionE2 5c (21) is one of Tremadog’s most popular outings. It follows a subtle line up through a series of smooth slabs and overlaps and offers an amazing variety of moves on close to perfect grey stone. In truth the only thing I remember about Pincushion was the warmth of the sun and me pulling through the overlap on the second pitch (photo below). Maybe this was the crux.

The other thing I remember was Dennis smiling at me when I took his photograph. It was a good day. Here is the Rockfax description of Pincushion. Looking at the photographs I can see that I led the second pitch using double ropes. When I look at the images of Dennis following that pitch he is on a single rope. This probably means that either Chris or Martin followed the pitch first (and carried my camera up). The cam just above Dennis is an original ‘Friend’, one of three that I purchased off its inventor, Ray Jardine, in 1979 from the back of his van in Yosemite Valley. I used these cams until the late 90s.

Dennis died at the age of 67 in an accident after climbing Birdman of Alcatraz (23) at Mt Arapiles in Australia. Chris died in 2010 after a long illness.

Click on these images for larger sizes. Most of these images appear in my Climbers Portraits & History collection on my SmugMug site here. These images cover my personal climbing experiences stretching from 1975 to the present and is an ongoing project.