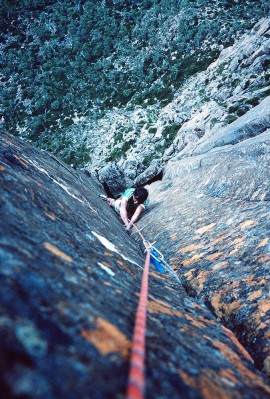 February 1983 and Chris Baxter, Miles Martin (UK), Dave Moss, Russ Clune (USA) and I spent a couple of weeks climbing at Mt Geryon and the Acropolis in Tasmania’s Cradle Mountain – Lake St Clair National Park. It was one of those rare trips where everything came together like clockwork. Even the weather – notoriously fickle in Tasmania – turned into two solid weeks of unrelenting sunshine with hardly a sparrow’s fart to blemish the sky. It was as if the weather Gods had gone on holiday and left the world in a fair-weather limbo. Every day we kept expecting rain and snow so we raced around, keen as cut snakes to get as much climbing done as possible. I took this photo from the top of the Acropolis looking south to Mt Gould and the Guardians. An amazing part of the world.

Black waters lap the towers of stone,
blood squeezed from forest and high moor.
For this is a place where giants roam,
The Acropolis, Geryon and the Minotaur. The bivvy cave at the foot of Mt Geryon. This wild spot has long been used as a climbing base for the big adventure routes on the 350 metre-high East Face of Mt Geryon. It is also conveniently situated not far from the Acropolis North Face, our main objective. Things of Stone and Wood

The original wooden plaques inside the cave, apparently carved by climbing legend Roland Pauligk (inventor of the RP) in February 1967. Man with a Mission

Chris Baxter, our intrepid leader. This photo was taken at the top of Old Wave Heroes (21), which Chris and I had climbed early in the trip. We did a handful of new routes on the Acropolis North Face, the best of which were two single-pitch climbs called Astro Boy (24) and Black Man’s Country (25). The top photo, taken by Chris Baxter, shows me approaching the final hard moves on Black Man’s Country (25) during the first ascent. Dave Moss looks on. It probably wouldn’t rate as grade 25 these days but Russ and I both agreed at the time that it would have been graded 5.12a in Yosemite Valley. These days small cams and improved shoe design really helps on these thin sustained crack problems.

The other two photos show Russ Clune repeating Black Man’s Country (25) immediately after I led it. I’m on the belay and Russ is powering through the technical final moves. The top of the corner crack really narrows down and the leader is confined to thin finger-jamming and tips lay-backing with feet on little more than smears.

Russ is wearing a pair of EBs (we called them bubble boots). These babies had all the stickyness of ice-cream lids and with more toe room than a pair of clown shoes. In one of the photos you can see a wooden wedge belonging to the Gates of Eden (18M1). The wild position on the upper reaches of this superb wall are absolutely breathtaking. Russ Clune seconding me up the first ascent of Astro Boy (24). This incredible long jamming corner was my personal highlight of the trip. The climbing was sustained, clean and technically perfect. It reminded me of some of those long crack pitches in Yosemite Valley and was named in recognition of the big stemming Enduro Corner on Astroman. The Gates of Eden

Russ Clune seconding the last crack pitch of Gates of Eden (18M1). You can see a couple of wooden wedges that had probably been used as direct aid during its first ascent many years previously. I remember clipping the old tatty cord and keeping on jamming. I can’t remember the grade of this last pitch but I suspect it must have been fairly straightforward (maybe only 18 or so).